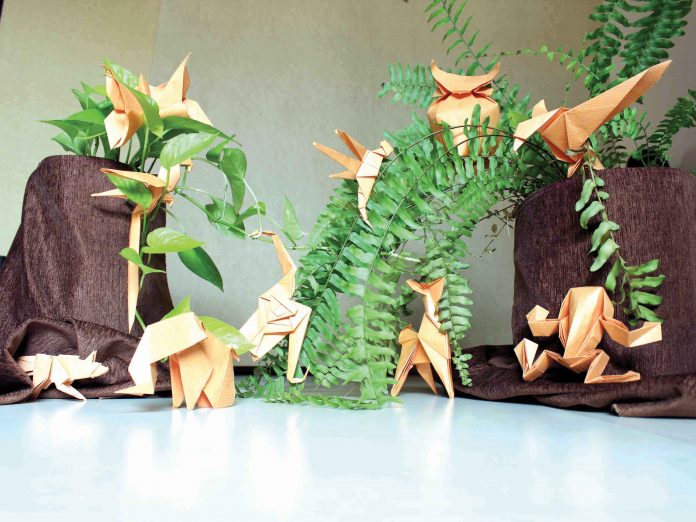 Origami is an age-old craft dating back to the invention of paper that continues to flourish in the modern world. Origami artists in Goa unfold the secrets of this art form to NT BUZZ

When he was around four years old, Shivaram Ananthanarayanan was given a book on the age-old art of paper folding. “My mother soon recognised my aptitude to fold the models without any assistance. I was following the diagrams in the book without even being able to read the instructions. And so, I was fed with more paper and origami books,” he says, adding that he is always folding. “I have a piece of paper at hand at all times,” he reveals.

And today, after almost three decades of folding paper the Dabolim-based origamist and paper engineer has seen this art form grow in the country and enter the mainstream.

But the craft requires immense patience and perseverance, he says. At its core, origami is simply geometry and mathematics. “This unique confluence of pure geometry to create organic forms is extremely intriguing. Origami is simultaneously paper sculpture, an aesthetic art form as well as geometry and all you need is a simple piece of paper and hands to dive into the world of origami,” he says.

In fact, the first rule of origami is you don’t require any special materials, says the self-taught artist. “Anything from printer paper to tissue paper can be used.”

The art form generally shuns the use of glue and cutting. For Ananthanarayanan it is this restriction that is truly fascinating. “It is almost like a puzzle that can take a while to reveal itself to you,” he says. “And the satisfaction of converting an idea from thought to
paper is deeply satisfying.”

And while the benefits of the art form are indeed manifold, in Goa, origami isn’t widely popular; there are only a handful who regularly practise the craft.

“Origami is much more than just an art; it brings us as a community together. Seeing the pure joy on people’s faces when they make a simple flapping crane is priceless,” says Ananthanarayanan, who since the age of nine has been working towards promoting origami in India and abroad by conducting workshops on origami for students, adults, teachers, the underprivileged, international schools and more.

And it was at one of these workshops that Vasco-based architect, Erika Pereira found her love for paper folding. “My earliest memory of origami was from when I was about seven years old. I attended a workshop by Shivaram Ananthanarayanan and instantly took a liking to it.” The classic paper crane, in fact, was the first thing she remembers folding.

The idea that a simple square piece of paper can turn into practically anything you want with the right folds fascinated her, she says. “I use whatever paper I can get my hands on. I’ve spent days working on some things while some others take mere minutes. I enjoy every piece I try. The more difficult and challenging the folds, the better,” she shares.

For Pereira, origami is a welcome pastime. “It’s like a stress buster. Contrary to what many people feel, it actually helps me be calm and refocus,” she says, adding that during the lockdown it definitely kept her busy for a while when work was scarce.

In stressful times like these, origami has truly proven helpful in keeping one’s mind engaged and relaxed, agrees Kanhai Naik who, despite his long hours as an ENT surgeon, makes time to fold paper every day – a passion he picked up at the age of ten.

“It’s very much like meditation because during the whole process, your focus is on getting the creases to line up perfectly, shape the model well and you think of little else,” he says.

Intrigued by the complexity and simplicity of origami, he likens the art form to a “good puzzle”. “It’s immensely fascinating that a single piece of paper can somehow be shaped into something as simple as a boat you might’ve made as a child to something as complex as a full dinosaur skeleton or a tiny insect or a dragon with all its scales and wings as details, entirely from paper!”

While Naik doesn’t make his own designs, he enjoys recreating origami artworks such as Satoshi Kamiya’s loggerhead sea turtle and winged kirrin, Miyamoto Chuya’s grim reaper, and Naomiki Sato’s pentagon rose which is by far his “favourite model to fold”. “These are designers who developed the idea and the diagrams for the model. To be able to design origami takes time, patience, and immense skill,” he says.

And it’s never boring, he says. “It has elements of mathematics, design, and art all the while being a simple, peaceful and meditative activity that anyone from a toddler to an octogenarian can enjoy. People are amused and often surprised as to what a piece of paper can become. And I think that more people should give origami a shot,” he says, adding that with so many resources available online, it would be hard to find the craft stagnating.

“I know very few people here who do it. I think it’s because you don’t always get a perfect result. But much like life with a bit of patience and perfection it can be very rewarding,” he adds.

Adityaram Nair, a third-year MBBS student, meanwhile began with origami when he was in class five when a friend taught him how to make a jumping frog. At that time though, he didn’t know that it was origami. But, he soon learned that within a single sheet of paper existed unlimited beautiful forms and took to YouTube to learn more about the craft.

“Most of the models I learned at the time were fairly simplistic ranging from beginner to intermediate level,” he says, adding that he began practising the art as a hobby.

And during the lockdown he started to devote more time to the art. “Origami was always a way to take my mind off things and relax. But in quarantine it provided me with a creative outlet and with the time I had, I started to try my hand at more complex models.” These included paper models of the Bahamut, dragon koi, and monkey king designed by Lien Quoc Dat, and the mask of Don Quixote which he says is “surprisingly simple”.

“I think what has always fascinated me about the art form is the ability to sort of give life to the paper. I’m always amazed by the various designs I find online by different people. The only limit is a person’s imagination,”
he says.