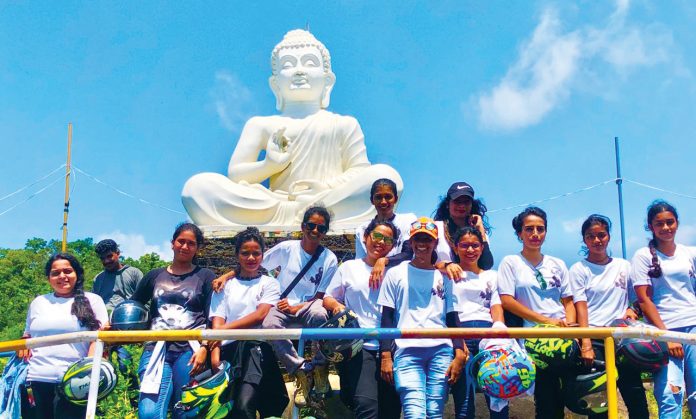 Moto Women Goa, a club of 25 female bike riders is organising a ride along with a self defence session and clean up drive this Sunday.
NT BUZZ gets details

Formed in April this year, Moto Women Goa (MOTO stands for Motorcycle and Motivation), is a women’s rider club founded by Sujal Panjikar along with two of her friends.

“It was my dream to start a group where women from different parts of Goa and of different age groups could be involved. As part of the group, we encourage upcoming women riders from Goa to join us to improve their riding skills, gain experience, and boost self-confidence. We ensure safety while riding and learning,” says Panjikar.

Today, the group consists of 25 members comprising of independent working women and students.

One of the members, Munira Shaikh from Ponda who is doing her graduation in aviation has always been passionate about riding motorcycles. In fact, she has been riding since she was 16 years old. And she believes that each of the group members is special in their own way. “Many of our group members have participated in various riding competitions. We are like a small family. Every member plays a major role in building up the team. We support and help each other grow,” she says, adding that one of the members Tulsi Dalvi, is teaching girls to ride geared bikes in and around Mapusa.

Over the last few months, the group has travelled together to different parts of Goa. And it was these rides that gave them the idea of organising their first event that will take place this Sunday ie October 18, where they will be organising a ride along with a self defence session and clean up drive. According to Panjikar, during their rides, the group would often observe a lot of garbage, especially near beaches. While they themselves always chose to carry their garbage back whenever they visited these places, they decided it was time to do something.

“As we are a family of 25 now, we would like to go and clean up the place which we will be visiting next. This will also bring about a sense of responsibility in everyone and help in the betterment of state,” she says.

As for the self defense session, Panjikar says it was imperative. “We all know being a woman and travelling to unknown places is very risky. So in order to protect themselves everyone should learn self defence. Apart from our riders, other girls are also encouraged to learn self defence,” she says.

And the group plans to hold many other such activities in the future. “Our family is still growing and gaining experience on wheels. This Sunday, is just the first of many,” says Panjikar, adding that their future plan is to educate more girls and women about riding, organising various competitions, and conducting sessions on self awareness so that women know their worth.

“Our motto isn’t to just go on trips together. It’s all about inspiring one another. Rise and shine together,” says Shaikh.