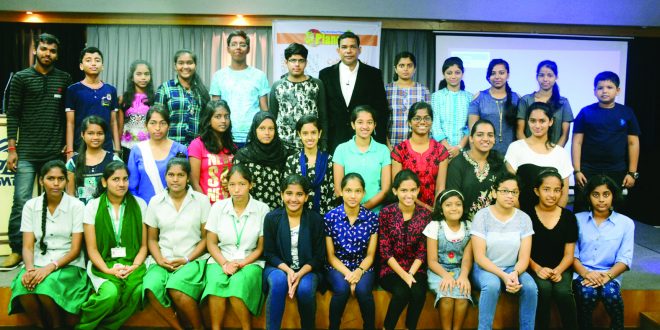 To revive handwriting and introduce the art of decorative handwriting, The Navhind Times Planet J organised a workshop on calligraphy on August 20 at Dempo House, Panaji. Open to the age group of 12 to 18 years, the workshop aimed at giving participants some important tips on using calligraphy creatively in a simple and doable fashion. Hundred and seventeen youngsters along with a few parents participated in the half-day workshop conducted by Vikrant Fernandes, who has been teaching the art form since the last twenty years to school and college students besides adults.

“Calligraphy is considered to be one of the oldest forms of writing in the world; a practice spanning at least 3000 years, and whilst it was once used largely for religious purposes, it is now evolved and is used for a wide variety of reasons,” explained Fernandes as he gave a brief history about the ancient art. “Considered as a form of visual art, calligraphy has been used by many ancient civilizations in their texts, edicts, etc. Now it continues to flourish in the form of wedding and event invitations, paintings, font design, graphic design, props and moving images for film and television, and other handmade presentations. This budding profession is integrated into the fields of fashion and interior designing as well,“ he added while speaking on the merits of learning the art form.

The various tools used for marking and writing calligraphy were elaborated on. Participants were shown the different types of pencils and brushes used in calligraphy and the manner in which they are to be maintained was also explained.

In the practical session that followed, worksheets were distributed and chisel point pencils were given. These pencils were individually and painstakingly hand sharpened with a chisel/blade to have the right thickness and flatness on one side and a point at an angle on the other. Participants were then shown how the pencil was to be held and used. Each alphabet was demonstrated in cursive print and it was amazing to see the skill and ease with which participants were following the demonstration. Fernandes and his assistants went round to each work table, checking on the progress made and each worksheet was corrected by Fernandes. An assistant was also in place to sharpen the pencils used by participants so at any given time, they had the right point and thickness as was required.

After completing the alphabets in capitals, the small fonts were undertaken. By this time participants had got a hang of the technique and were more than ready for the second worksheet that comprised of tills, sways, swashes and swags in ascending and descending order. The difficulty level of this part of the session was much higher but participants followed instructions attentively and did their best.

In the last session, Fernandes demonstrated how to make cards using card paper and punched paper. The workshop ended with certificates of participation being handed out to all.