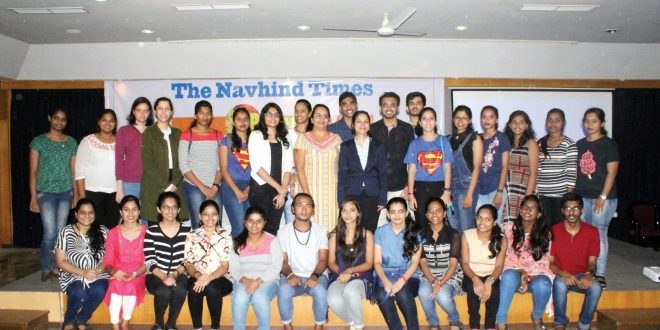 Acing the interview with Planet J

Planet J in its continued mission of bringing value to its readers organised a workshop on interview facing skills on August 5 at Dempo House, Panaji. Open to the age group of 16 to 23 years, the workshop aimed at giving participants some important tips on answering an interview, first impressions and standard questions asked, besides other related topics. Hundred and seventy two youngsters along with a few parents participated in the half-day workshop conducted by communication skills coach and proprietor of persona and skill development centre, Speaking Studio, Runa Menezes.

At the start of the workshop participants were asked to pair up and introduce themselves to each other. They were then taken through the steps of the interview process. Menezes explained that most people think that the interview starts after the candidate enters the interview room. Whereas, in fact, the actual interview starts much before: perhaps in the parking lot, at the reception desk or the waiting lobby. “The potential candidate’s behaviour may be reported by the staff of the organisation or even observed through CCTV recordings before actually hiring him/her,” she added. She stressed the importance of the first 10 seconds of the interview – when the candidate first enters the room. “Good body language, a well-groomed appearance, confident and graceful strides while walking in and following the right etiquette before taking a seat, could be the difference between being considered favourably or not,” she said.

This was followed by a detailed presentation on the do’s and don’ts of body language and its various nuances: good posture, the right seating position, open and receptive gestures, effective eye-contact and the perfect handshake. She demonstrated the difference between a half-hearted and a firm handshake which included good eye-contact. Participants were asked to try out the perfect handshake, in pairs.

Emphasising the importance of good grooming the participants were taken through a detailed description of what to wear, including the appropriate colours for an interview. The interaction that followed had participants clearing up their doubts about what would be considered the right hairstyle, colour, shade of nail paint, kind of jewellery and footwear for an interview.

The second half of the session was devoted to familiarising participants with the most common questions that are usually asked during an interview and how to answer them. “It is extremely important to prepare a good and solid self-introduction, in order to effectively answer the interview question, ‘Tell me about you’,” she said. With the help of videos she also gave them insights into some of the commonly asked questions, what is actually expected of them in terms of a response, and how to prepare for them. She demonstrated how challenging questions could be tackled with good preparation, the right strategy and composure. Smart answers to tricky questions like – What is your greatest weakness? How do you handle difficult situations? Where do you see yourself five years from now? and Why did you leave your last job? were also shared by her. Participants were given tips and techniques to deal with situations where they didn’t know the answer or felt stumped by the unexpected question. They were also encouraged to do their homework or research on the organisation that they were attempting to join, if they were serious about acing the interview and getting the job.

The workshop ended with a Q&A session, after which she reminded the participants to consider the learning from this workshop as an on-going process and wished them all the best for their future endeavours.