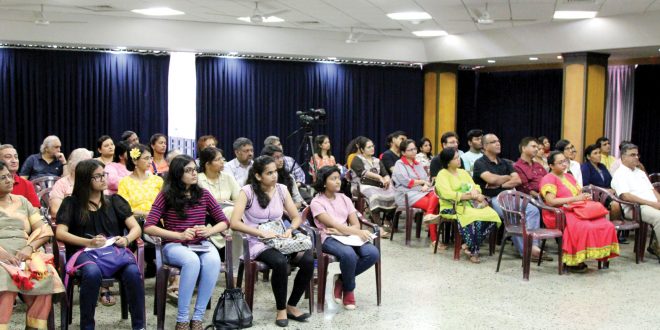 To understand the role of food, traditional diet, body type, etc, the Navhind Times Zest organised a workshop, ‘Mindful Eating through Ayurveda’, on Sunday, September 2. Conducted by professor and head of department, Gomantak Ayurved Mahavidyalaya and Research Centre, Shiroda, Neelesh Korde; the 2-hour workshop was open to those above the age of 16 and was held at Dempo House, Panaji.

The workshop began with an introduction to the three necessities of life, namely – air, water and food. “Balance between these elements equals to health,” stressed Korde. “Air provides basic energy through lungs. Water maintains fluid balance, and food the nourishment and reproduction of cells,” he added and further spoke about Panchamahabhoota; one of the fundamental theories of Ayurveda. “Ayurveda believes that the existence of living beings includes the physical body, mind and soul. The individual is a miniature replica of the vast universe outside. Both are made up of the five basic factors or panchamahabhootas, which are air, water, fire, space and energy,” he said. Elaborating on the same he explained the theory in an atomic structure as well as in a cell.

In the next session he covered Lokapurusha Siddhanta and described how the body is the epitome of the universe. “There is great similarity between the outside world and the human being. All the things of the universe are present in the human body in one form or the other. In other words, man is a microcosm (an epitome of the universe). All the laws of the outside universe are also applicable to the body and its activities,” he simplified. He then spoke about diurnal and seasonal changes and followed it with Prakriti or the individual constitution.

His definition of food was not just unique but also drove home some truths that many had forgotten. “Food is an essential substance having pleasant appearance, aroma and taste, that which is capable of being digested, absorbed, and utilised when consumed in a proper manner and in an appropriate quantity so as to help living organisms to replenish the wear and tear of body tissues, produce new body components and that which imparts energy, strength and happiness,” he said.  The six tastes – Madhura (sweet), Amla (sour), Lavana (salty), Katu (pungent), Tikta (bitter) and Kashaya (astringent) were then explained in detail with examples and functions.

In the last part of the session, Korde, covered the effect of food on the mind. Quoting Chandogya Upanishada he said, “Pure diet leads to a pure mind,” and added, “Food is not just for the stomach but also for the mind, intellect and sense organs.”

Participants were engaged right from the word go, not just for the profound knowledge they were absorbing but also due to Korde’s oratory skills which can only be described as exceptional. His simple and lucid explanations had everyone hanging on to his every word and in the question-answer session, their doubts and queries were patiently answered.