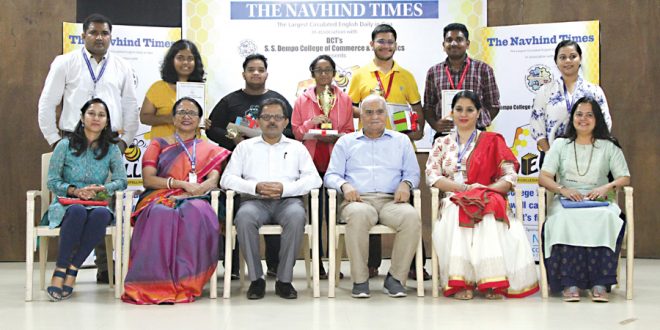 In a one-of-its-kind spelling competition organised by The Navhind Times in collaboration with the department of Events Management, S S Dempo College of Commerce and Economics, college students put their spelling skills to the test. Of the 121 students who participated from 28 colleges across the state, only 21 made it to the finale which was held on December 18 at the college campus in Cujira.

After the first round which was held on Saturday, September 28 only 40 made it to the second round. At the next round in October there was neck-to-neck competition, and 18 participants were shortlisted for the finals. The finale consisted of three rounds and 10 of the 18 made it to the third round. The finalists had to go through a gruelling time which had the audience biting their nails and sitting at the edge of their seats! Each finalist fought gallantly to stay in the race and there were ties both in the semi finals as well as the finals. After an even more exciting tie-breaker, five winners were declared overall.

The judges for the competition were assistant professor and HOD, English, S S Dempo College of Commerce and Economics, Cujira, Aditi Barve and communication skills coach and proprietor of Speaking Studio, a persona and skill development centre, Runa Menezes.

“It was great having a college edition of the Spell Bee this year and truly heart-warming to see youngsters who can spell well, in an age where SMS language and spell-check have taken away the thrust ‘to be good at spellings’. The participants were good and I have to admit, I wouldn’t have got many of those words myself,” shared Runa Menezes. “As a host and judge, I had to keep an unbiased and professional ‘straight face’ but here were moments I felt like jumping up in amazement and commending the participant for getting a difficult word correct,” she added.

Winners were awarded certificates, trophies and prizes sponsored by NKIS computers. The chief guest at the valedictory function was Registrar, Goa University, Y V Reddy. Speaking on the occasion he congratulated all the participants and encouraged the love of reading and learning spellings. Also present on the dais were principal, S S Dempo College of Commerce and Economics, Radhika Nayak; vice principal, Gauri Tamba and editor, The Navhind Times, Arun Sinha along with judges, Aditi Barve and Runa Menezes.

After the success of the competition for college students, The Navhind Times is looking forward to the next edition in 2020 which promises to be bigger and even more unique.