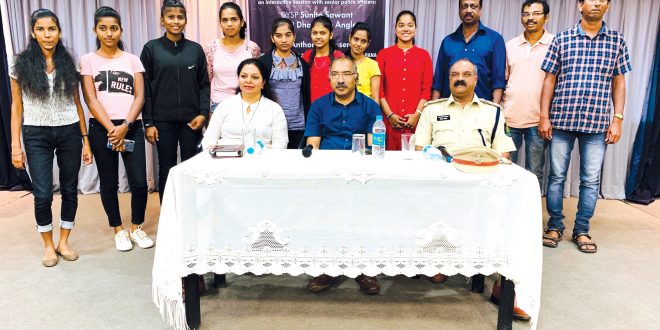 Learning about a career in the police force

Under the banner of ‘Your Career Matters’, The Navhind Times organised an interactive session with senior police officers on Sunday, February 23 at Dempo House, Panaji. The session was held to highlight a career in the police force and understand the various aspects of the profession. DYSPs Sunita Sawant, Dharmesh Angle and Antonio Monserrate were the resource persons for the session which was attended by 170 odd school and college students along with teachers and parents.

Monserrate began the session with an introduction of the police force and his 33-year career in the force. He spoke about what the job entails and said: “Being in the police is a job that comes with many responsibilities. As a police officer there are no timings and you are on call 24×7. It is a tough job and unlike any other.” Illustrating his facts with examples, he further said: “In this job various skills are required but patience and quick thinking are extremely important.”

Sawant added to what the other skills and attributes needed for the job were. She spoke at length about focus and determination as a prerequisite to pursuing a career in this field. Citing the need for perseverance she said: “When I first joined the force and was sent to the academy, it was extremely difficult. As a young girl, I missed home and longed to come back but it was my mother who motivated me and helped me tremendously during that period.” She encouraged the participants to utilise their skills and knowledge to have a plan and follow through.

“You can join the force at different levels,” said Angle and explained in detail the different posts and the qualifications required therein. “Even after you join the force, you can appear for exams and move to a higher post, in fact there are certain age relaxations when you do so.”

Speaking about the pros and cons of the profession, all of them said that being in the police was definitely an honour! “Every day is a different day and no two days are the same. The job satisfaction is really high,” stated Angle, “Being able to help people is one of the best things about this job.”

“As a police officer, we are not just limited to policing and have to take on different roles; counsellor being one,” added Sawant and justified her statement with an example.

In the question and answer session, participants were given an opportunity to clear their doubts and ask relevant questions. The questions ranged from the subject of entrance exams to why the resource persons had joined the force. It was an eye-opener session for most as they were given firsthand information about the profession from the senior officers.

Motivating and inspiring participants Monserrate also highlighted the fact that everyone has to act as a police by being a responsible citizen and following laws. “It is of extreme importance that we follow basic rules like keeping our surroundings clean and wearing helmets while on our two wheelers or parking right. These help not just ourselves but also the police in doing their jobs.”